Finally, Malaysia is getting its first 5G-ready mobile network plans. And after? Source: YES 5G

In a country that has been on a rollercoaster ride in its 5G rollout plans, Malaysia will finally have the fifth-generation mobile network available to the general public from June 9. YES 5G – one of only two mobile networks to have subscribed to the country’s state-run 5G infrastructure – yesterday announced new 5G-ready mobile network plans, which it boldly claims as the “ cheapest plans in the world.

For consumers who do not own a 5G-enabled smartphone, the 36-month Yes Infinite+ contract entitles customers to a free 5G smartphone. Overall, the most basic 5G plan offered by YES would cost RM58/month and it comes with 10GB of hotspot data. There is also a standard plan at RM88/month with 40GB hotspot followed by a Premium plan at RM118/month with 70GB data. The highest plan is Infinite Ultra, which includes 100 GB of access point quota.

YTL Communications General Manager Yeoh Seok Hang pointed out that his company is the first in the country to offer 5G services, on a pilot five months ago. “As commodity prices rise in the current inflationary climate, we are reducing data prices by 300% to just 30 cents per GB with our all-new data plan.” Currently, the telecom provider’s 5G service claims to offer an average download speed of over 665 Mbps, which is more than 15 times faster than the current average 4G speed of 44.1 Mbps.

The current state of 5G in Malaysia 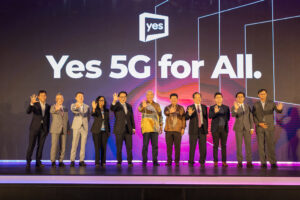 For context, the discussion around 5G has been going on in malaysia for a few years now but pilot testing only started in 2019 with the intention of having 5G in some cities by the end of 2020. Things took a turn however when there was a change of government in half way. So by 2021it was decided that the country’s 5G program will be managed by a state-run entitywho was first tasked with studying the best possible method of launching the infrastructure.

The entity, Digital Nasional Berhad (DNB), offered a study claiming the most effective approach will be to deploy the Single Wholesale Network (SWN) system, a concept poorly accepted by the largest telecommunications operators in the country. Resistance, still ongoing, has led telecom operators to propose a dual wholesale network model, a format that will allow operators to co-operate 5G spectra alongside DNB, giving them full autonomy over infrastructure. .

The government, not too enthusiastic about the proposal of these telecom operators, eventually suggested that a 70% stake in the country’s only 5G network operator be split among a wider group of telecom companies. So far, the offer has only been accepted by two telecommunications companies, Telekom Malaysia Bhd (TM) and YTL Communications themselves.

On the other hand, based on an exclusive report by Reuters, Malaysia’s other four largest telecom companies – Celcom Axiata Bhd, DiGi Telecommunications, Maxis Bhd and U Mobile – are seeking a majority stake in the state 5G agency, thwarting a government proposal to offer them a stake minority. The four dominant suppliers have also want a review of the pricing model and network access plan offered by the agency.

They are however on a tight deadline, as the government has given them until June 30, 2022 to accept the offer. “We will study the justification but the basic principle is still the same, I am not going to create a monopoly and expand a certain business,” Communications and Multimedia Minister Tan Sri Annuar Musa told reporters on Thursday after the meeting. launch of YES 5G services.

“The time has come, as far as I am concerned, that by the end of June I want to see 5G moving forward without further hesitation. Despite all this haggling, the time frame remains the same. would come under my ministry after June and I can promise you that I am going to be very serious about this. DNB must perform,” Annuar added, referring to DNB’s goal of covering 80% of the country’s populated area. by the end of 2024.

The national 5G network deployed by DNB currently covers parts of Kuala Lumpur, Cyberjaya and Putrajaya. They have recently started extending 5G coverage to Selangor and Johor. DNB aims to reach 40% population coverage by the end of this year.

By Aniruddho Basu, Senior Vice President and General Manager, Emerging Business, Mavenir. 1. Private networks are not new, but we are entering a new era for private networks The concept of a dedicated wireless network is not new. Private mobile radio networks (PMR), then private LTE networks dedicated to public security uses, have been around […]

MIAMI VALLEY — Today, Premier Health’s CareFlight Air and Mobile Services will host its Drive Smart program at area high schools. Drive Smart has been offered for more than 20 years and is a nationally recognized crash simulation program that gives high school students real-world insight into the consequences of poor choices before getting behind […]

When our government does something good, I never understand why it’s kept so secret! Because many of you will be leaving the country in the next few months, I wanted to make sure you didn’t leave town without this tip from travel agent 101 of the day: MOBILE PASSPORT is back in business in most […]